Where Next? UK Launch

Globally, we had developed a new platform to position Glenfiddich as a luxury brand united behind one singular thought: Where Next?

But in the UK, the brand was suffering awareness issues and a disassociation with Glenfiddich as a luxury brand. Moreover, they had slipped to the UK’s No.2 Single Malt.

So, combining dramatic OOH sites in London, Edinburgh, and Glasgow with a cinematic brand film, luxury print, digital and social activations – our campaign sought to return Glenfiddich to the UK’s No.1 Single Malt Scotch Whisky brand through engaging a new audience.

The brand film centralised the campaign, telling the story of Glenfiddich’s iconic Stag and its journey in embracing the unknown to grow stronger. Reframing this philosophy for a new audience, we took inspiration from the visual world of luxury fashion to pose a bold question to our UK audience; what risks are they going to take in order to grow. In other words; Where Next?

The OOH centrepiece was a two-week 3D activation at London’s Piccadilly Lights, powerfully highlighting The Stag’s journey and connecting the brand icon with the brand idea. In the regal Glenfiddich pose, The Stag makes eye contact, then leaps from Europe’s largest advertising screen in a dramatic display of creative innovation.

In Shoreditch’s artistic district, a hand-painted mural of The Stag with giant 3D antlers towered above the graffitied streets – embodying a disruptive, new-luxury approach for an edgier crowd. Integrating product, we blended targeted smart ads into the artwork; each offering a bespoke Glenfiddich drink at Callooh Callay to those inquisitive enough to scan a mysterious barcode.

Bridging a set of innovative executions, we stripped back conventional techniques, singling out distinctive assets via a black and white colour palette in reference to luxury fashion and newsprint. Copy stayed true to the platform’s message – simply asking “Where Next?”. As pertinent as it is powerful, the two-word statement created freedom to flex bold and minimal visuals – allowing the iconic Stag logo a leading role in the work.

Supplementing awareness-driving OOH and TVC activations – we used a combination of social, digital, and print to streamline sales conversions for Glenfiddich’s premium single malt range in the build-up to Christmas.

Achieving a targeted reach of 2.5 million UK viewers – the brand’s largest to date – of the ‘Where Next?’ campaign, Glenfiddich saw dramatic sales uplift. Our awareness and social conversation strategies combined to pay in dividends, contributing to off-trade sales rising +10.8% in the final 12 weeks of 2021 and Ecommerce sales rising +20.2% over the MAT.

The campaign contributed towards a category-leading on-trade ROS growth to above pre-pandemic levels, increasing by +3ppts. Awareness in the luxury space also saw growth. Brand relevance also rose by +3ppts and luxury brand perceptions up +2ppt.

Importantly, our campaign made a significant contribution to returning Glenfiddich to the No.1 Single Malt Scotch Whisky in the UK. 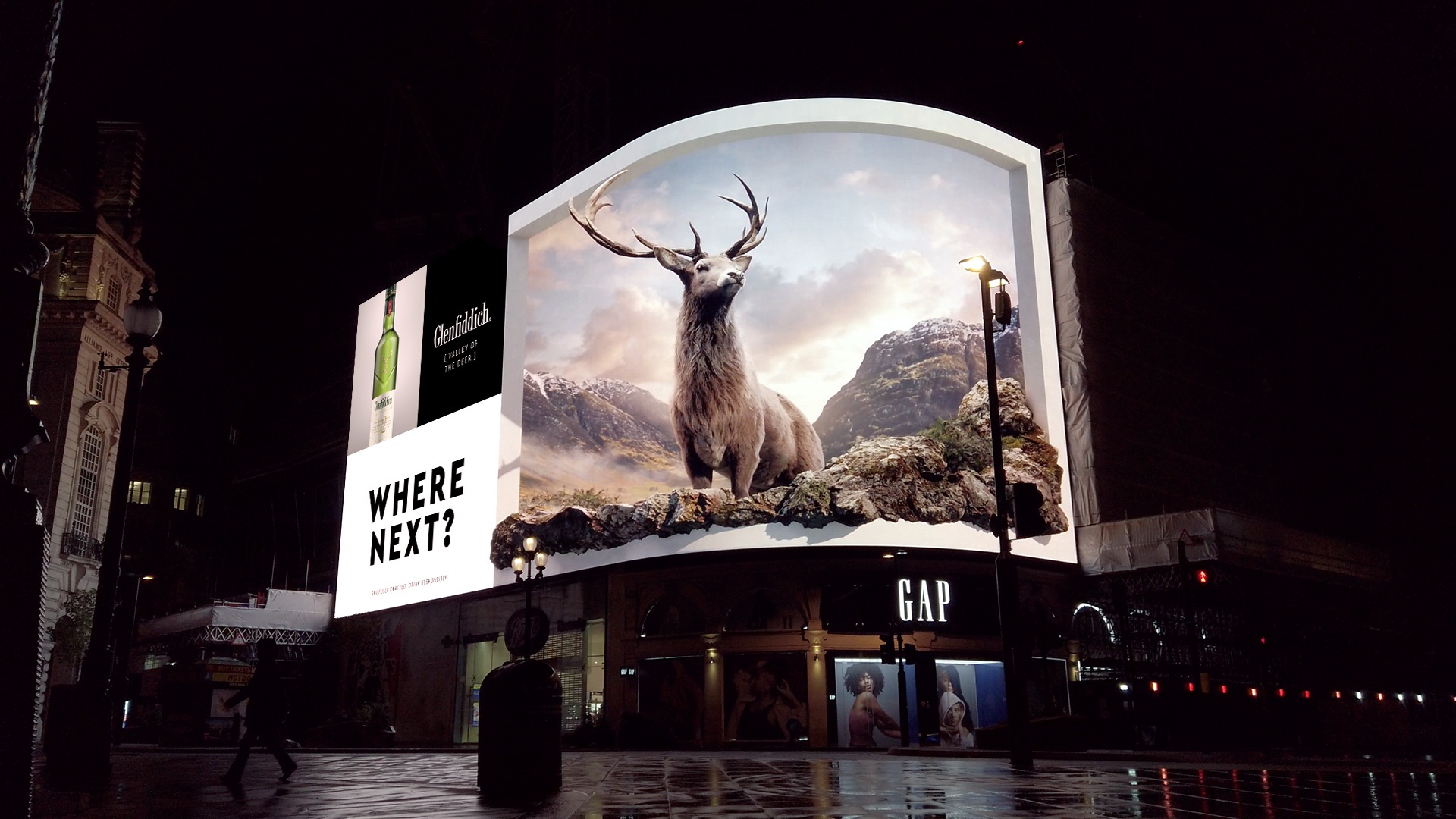 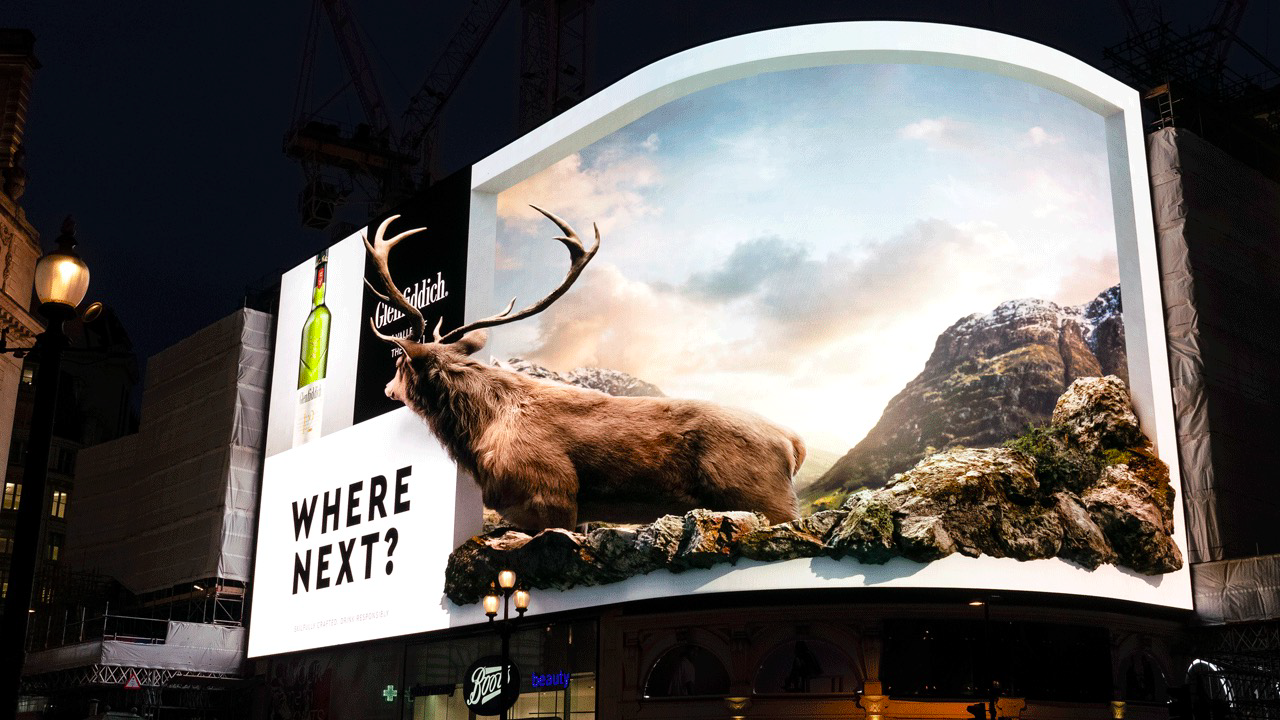 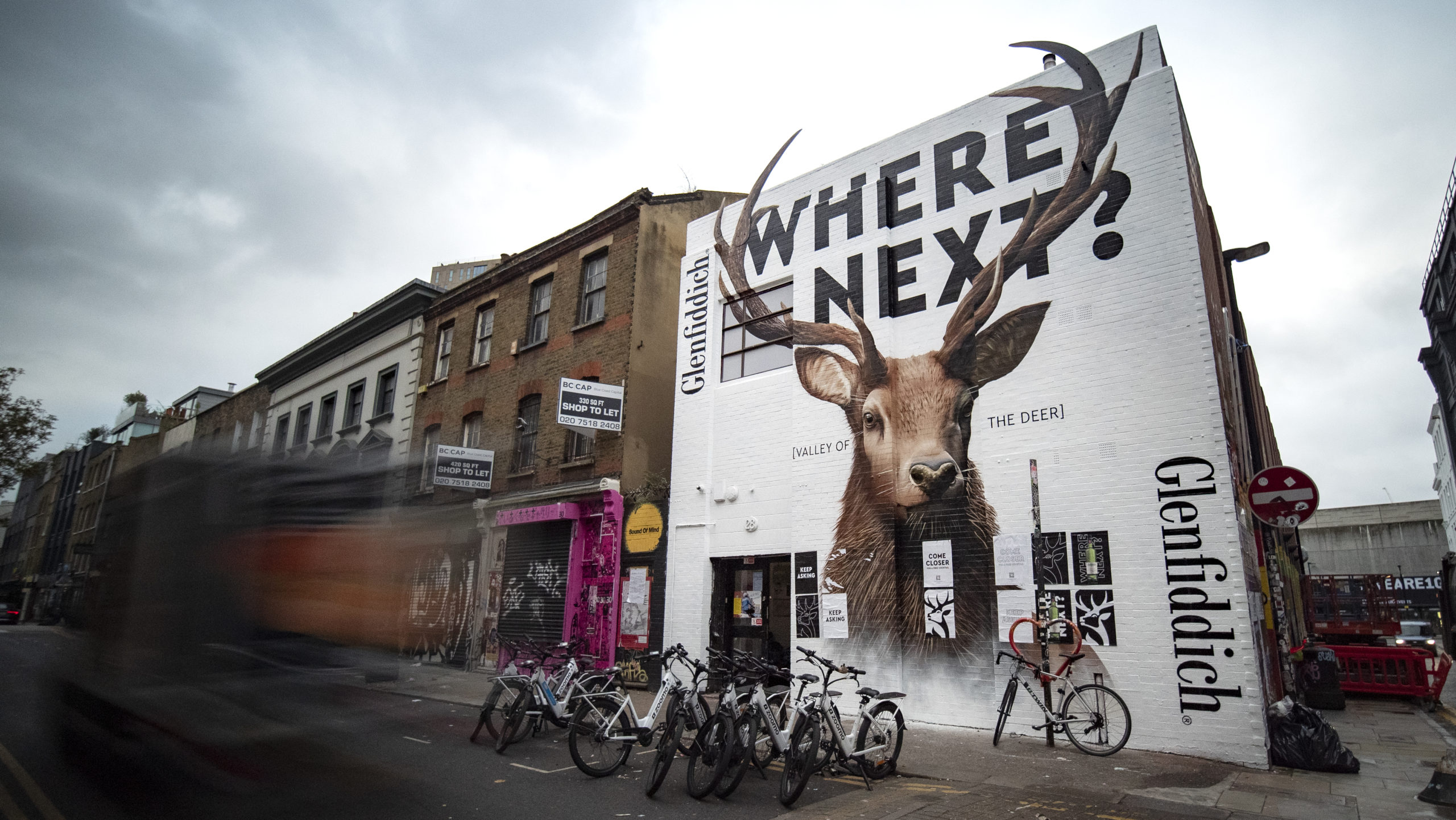 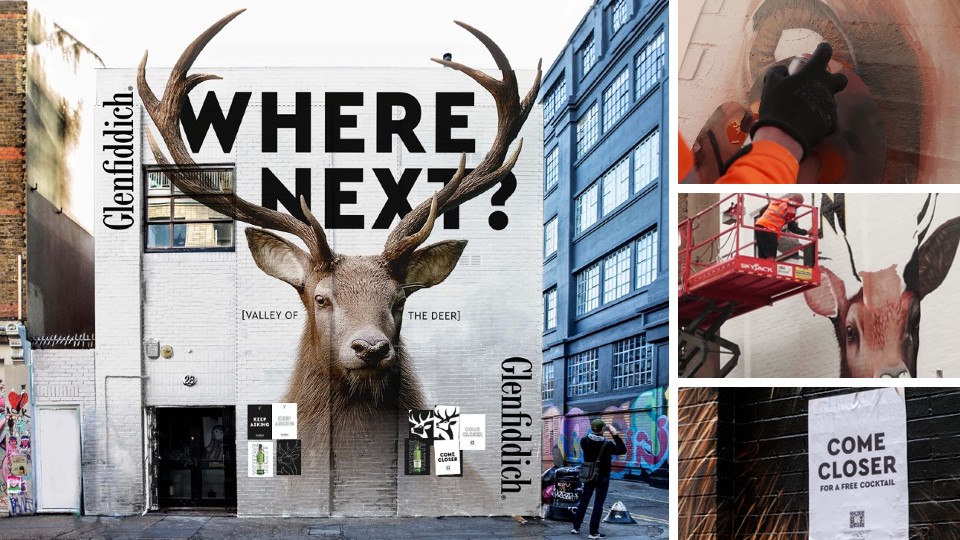 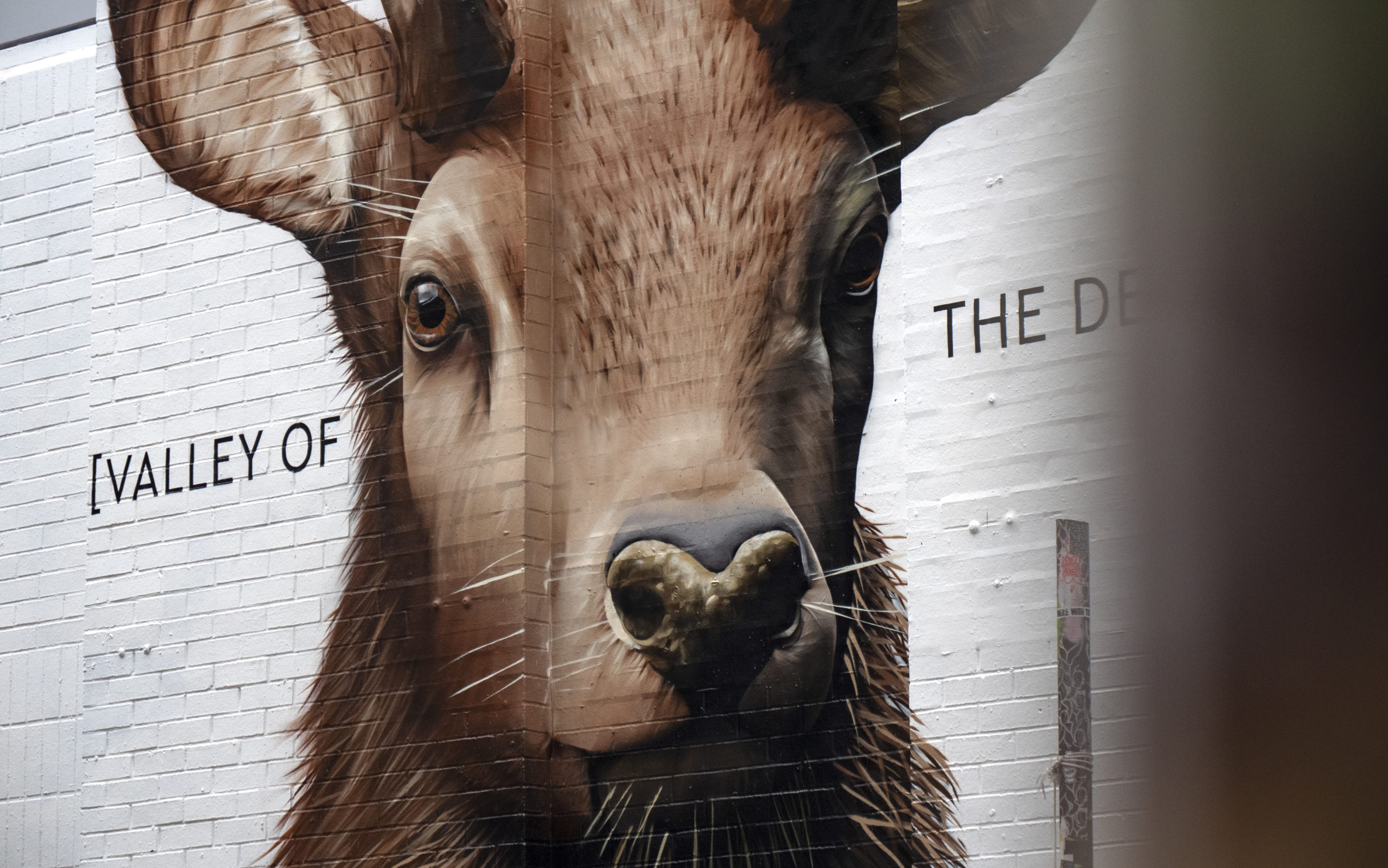 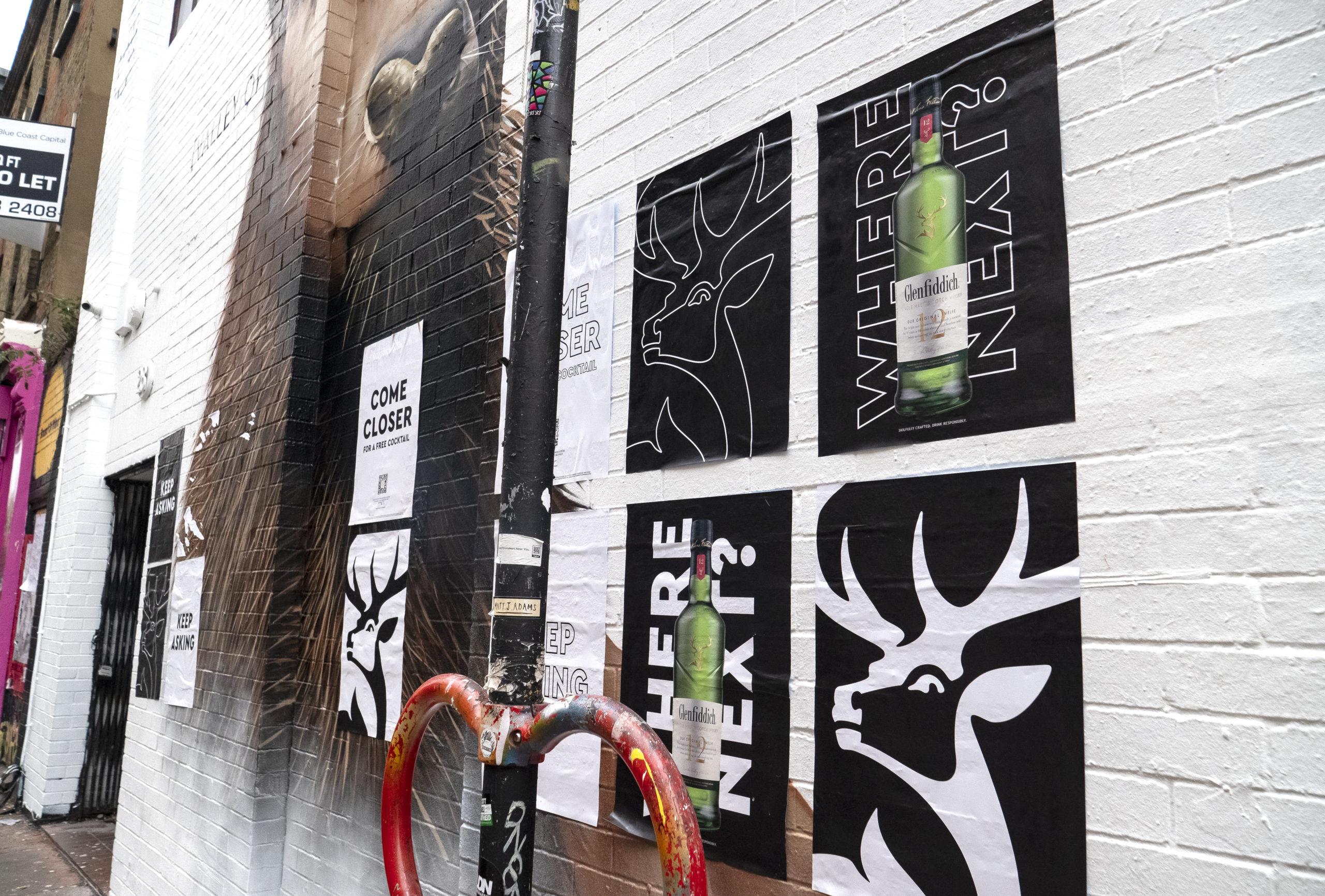 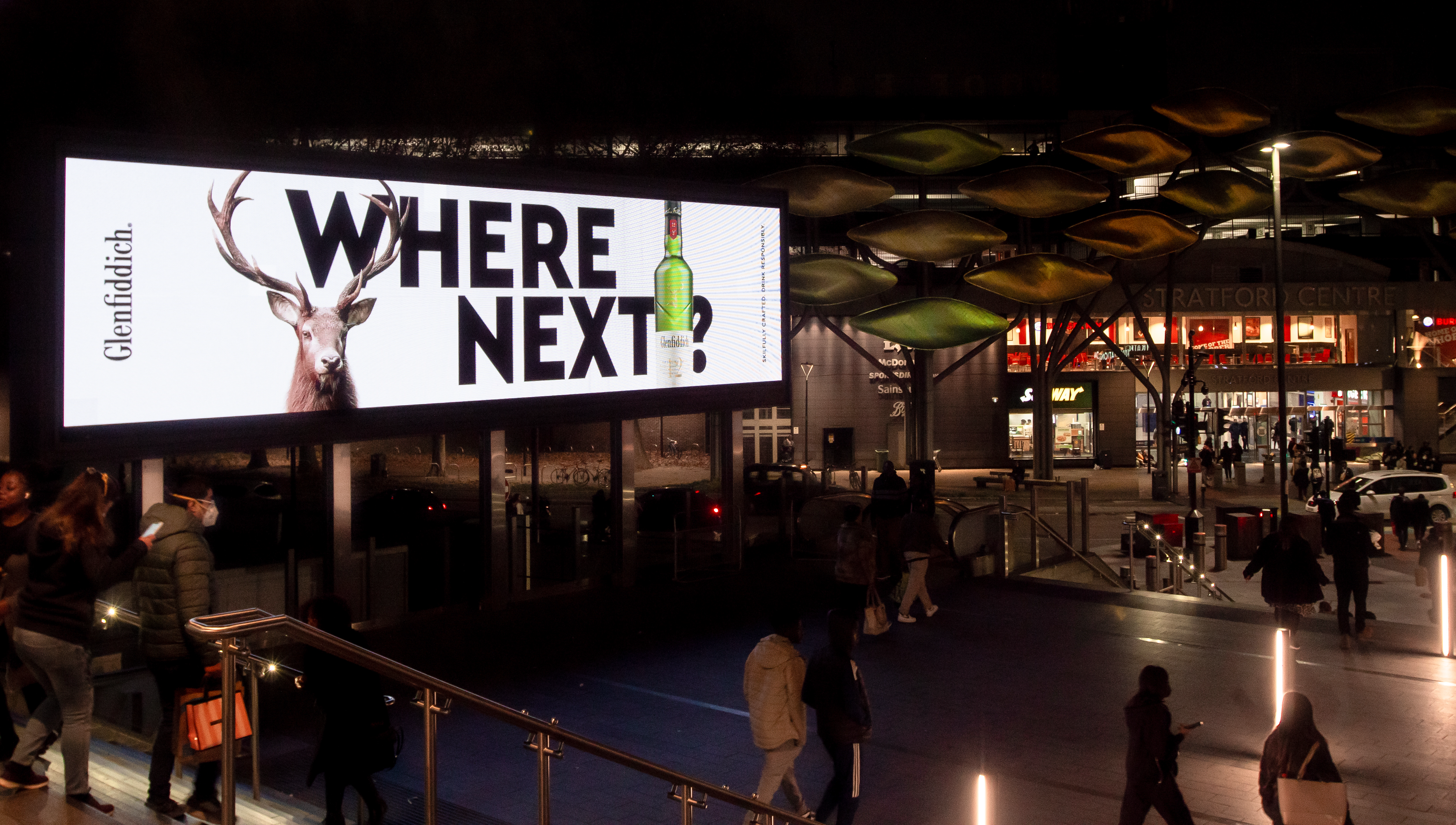 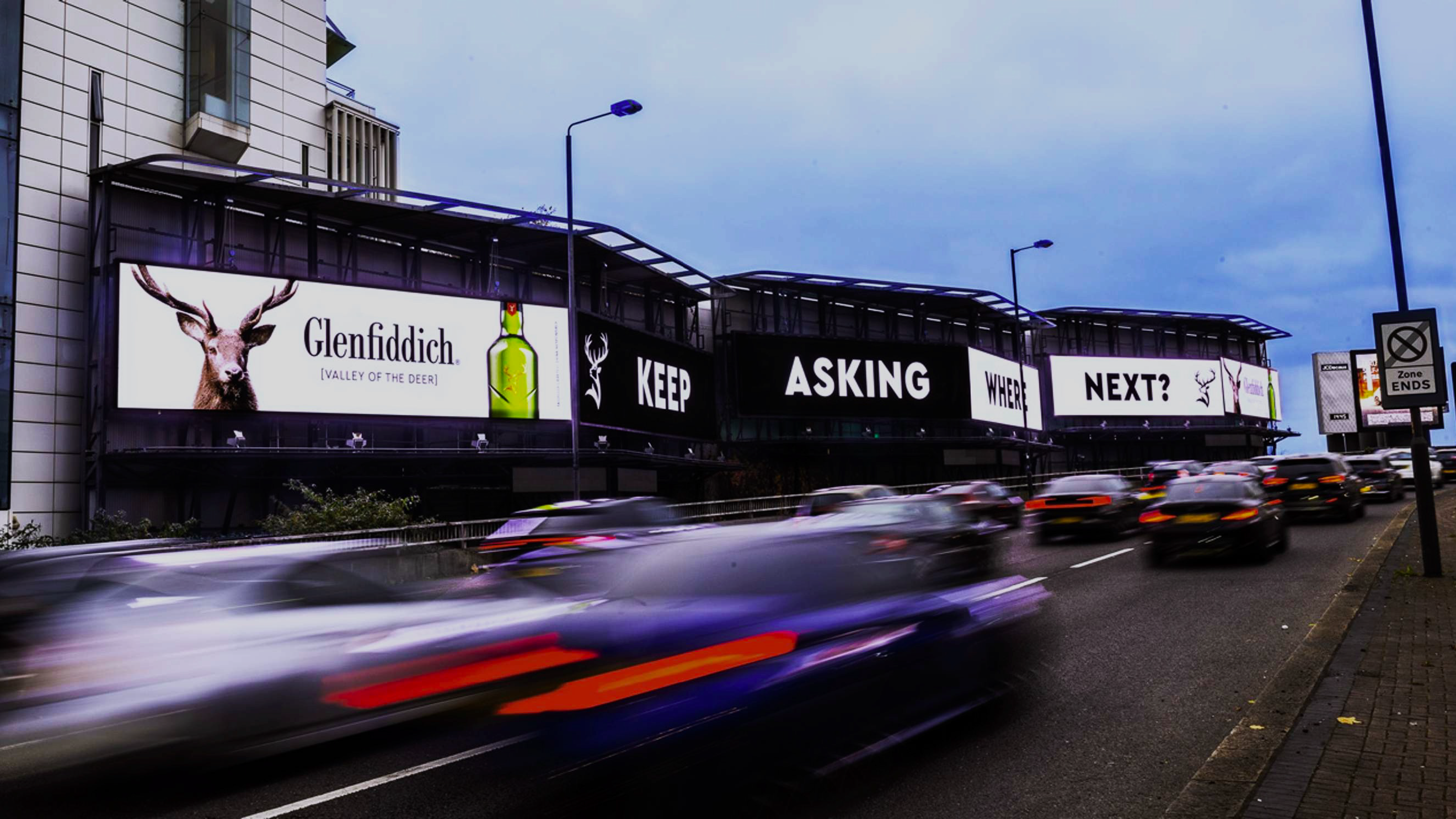 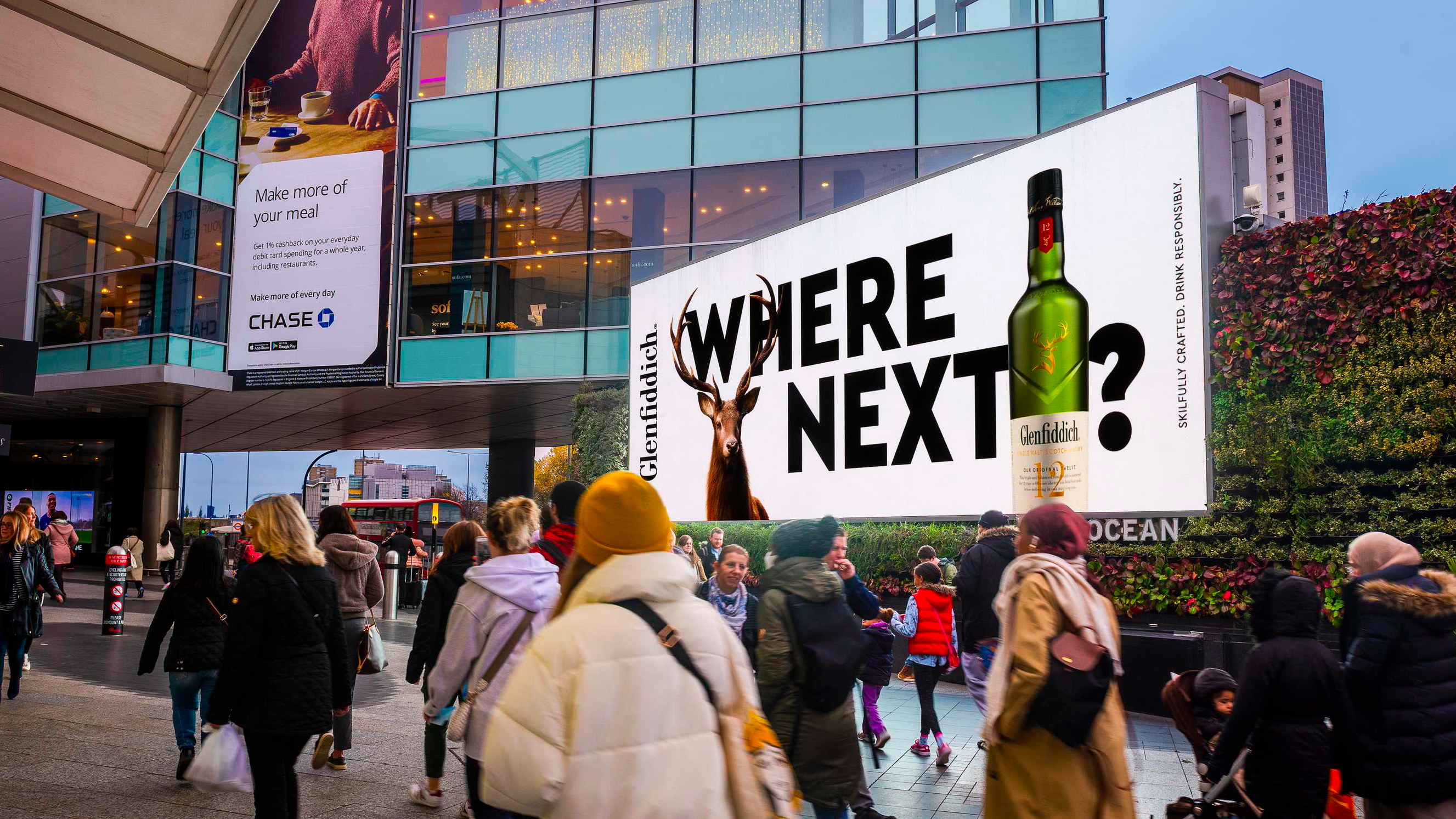 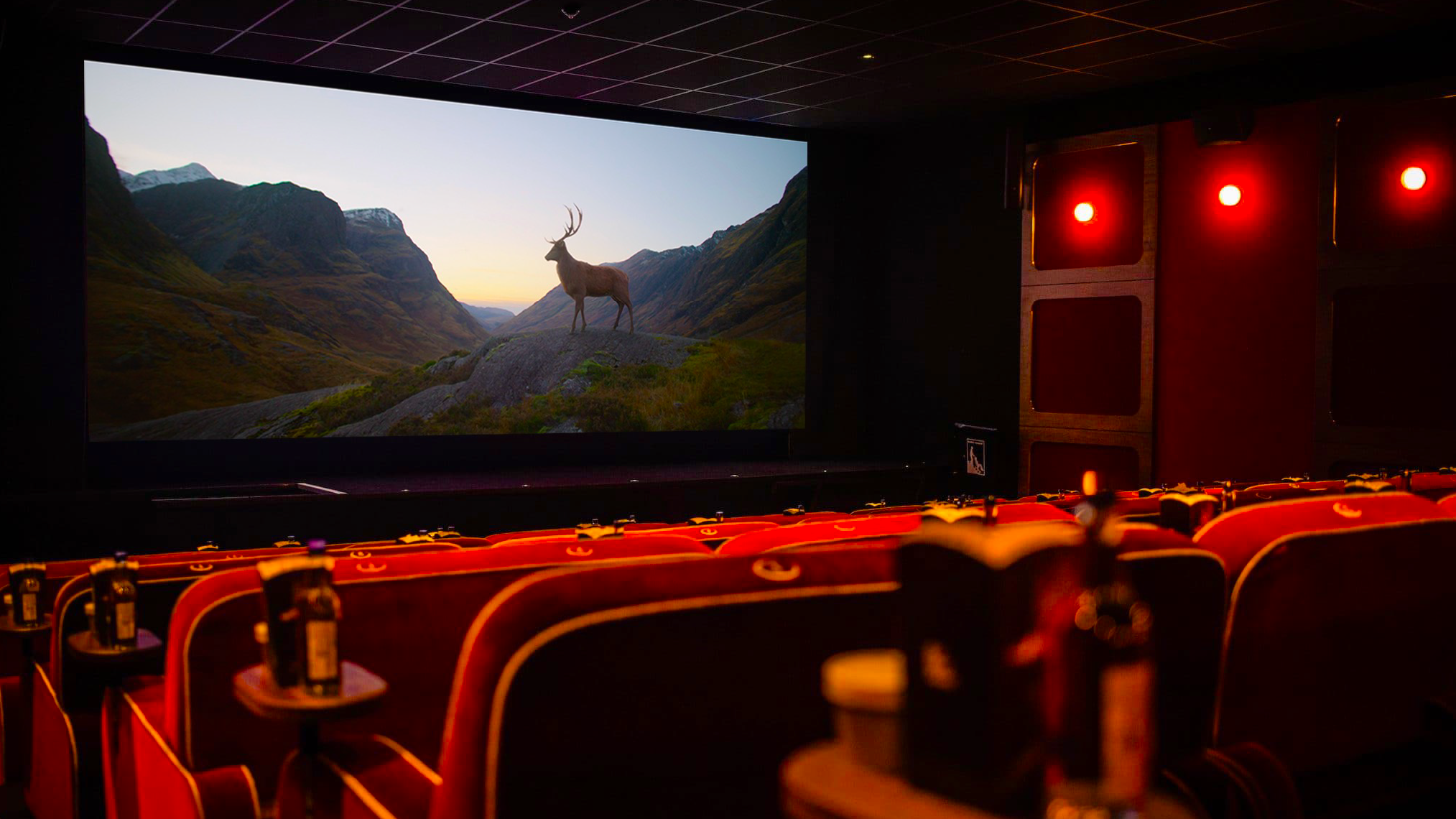 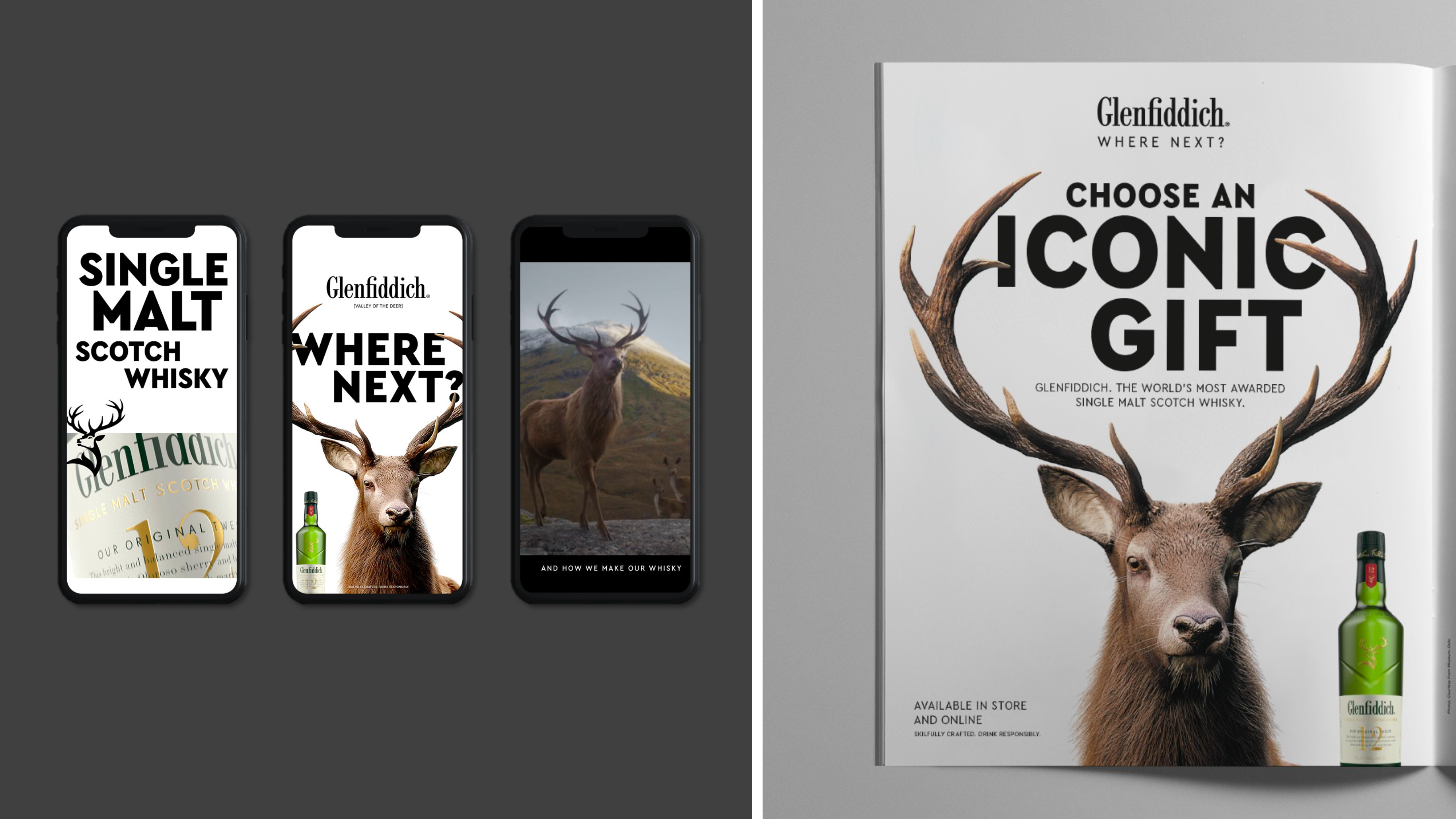